Today we are announcing the release of Trapdoor, our AWS-based serverless honeypot.

The idea of a serverless honeytoken isn't new. Adel released his honeyLambda a few years ago and we've been working with it for quite some time. It was because of this experience and the goal of improving on what was already a great idea that we decided to go to the drawing board and see how we would change and tweak the concept.

Trapdoor is a serverless application that can be deployed in any AWS environment. Its goal is to receive HTTP requests with the intent of identifying, and alerting, on its visitors. The URLs generated by Trapdoor can also be referred to as honeytokens.

While you can get creative on how to use it, one of the goals of a honeytoken is to be hidden or stored in a "safe" place and, if accessed, fire of an alarm, as access to the token would be considered a compromise or unauthorized access.

This example is the passive way of using deception tactics. Additionally users can also create Trapdoor tokens and save them inside of other honeypots. Much can be said about ideas to trick a botnet operator to move away from the zombies and make the operator himself access a URL, but we'll leave you to figure that part out.

In HTTP mode we will retrieve and notify on what is available in an HTTP session (IP, location, device type, etc) and User Agent (browser, OS, etc). Information from HTTP is always available and the Trapdoor operator will always be alerted on it. However, if the visitor allows JavaScript to run, we deploy the client fingerprint payload.

In Client Fingerprinting mode Trapdoor will, aggressively, attempt to retrieve a wide range of information from the client, namely:

It is important to mention that since Trapdoor is very much in an alpha stage changes to the reported information will likely occur based on our experience as well as community feedback (which we'd like to receive).

Another interesting feature is that Trapdoor will also attempt to create a unique identifier per client/visitor and save that information so that we can maintain a state of that visitor's actions (how many times a particular user accessed a honeytoken and other information). Trapdoor tracks and reports based on two identifiers:

This allows us to report not only on individual, ad-hoc visits, but also provide a history-aware alert when notifying users of access to their honeytoken.

The main motivation for developing the stateful client fingerprinting was to create the ability to track visitors who might hop between exit nodes (from a VPN, Tor, etc). With this feature we will attempt to track the user and provide that information on the alert. Before moving on to the alerting section, here's a quick example of how this feature translates into actionable tracking: 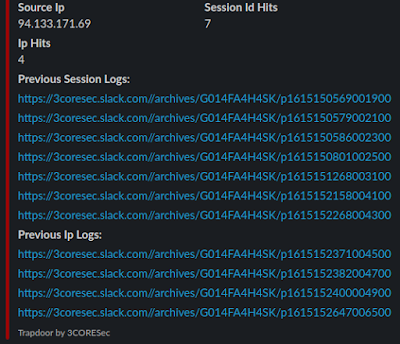 We went back and forward on which methods we should support. Ultimately we decided to rely on Slack messages as those provided us with the highest level of control and interactions

An interesting aspect of notifications, and as concerned users of alert fatigue, Trapdoor will first report access to the honeytoken using the HTTP-derived data. If the JavaScript-based methods are successful, that same message will be edited to include the additional information that was gathered by the second deception method.

A notification (and these will age poorly with time as we continuously change how it looks) will look something along the lines of: 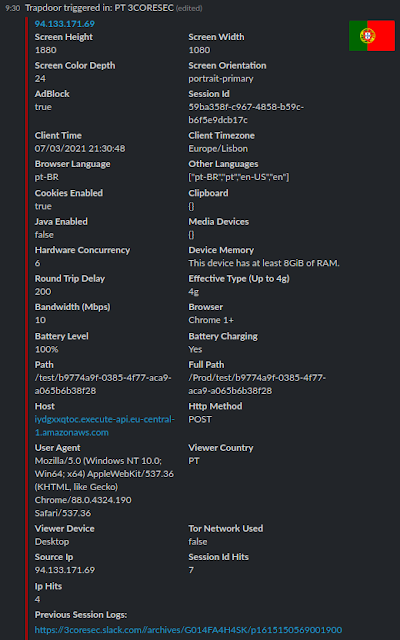 We considered releasing Trapdoor after we went through additional testing but eventually decided against it. It is important to mention that this is a very early release and while we're actively improving the application things will change (and possibly break) frequently.
All installations of Trapdoor through the AWS SAR benefit from the latest code changes. You're encouraged to keep your deployment updated to make use of these changes.
We'd also love to have community involvement in this project. Let us know of any ideas you have for improvements or any bugs you run in to. Contributions in terms of features to Trapdoor are also very much encouraged and welcome. If in doubt about contributing, reach out to us. We'll help you out.

3CORESec is releasing this project as a proof-of-concept for the research community.

Please remember that it might not be legal to run Trapdoor in some countries and that the information you will be accessing could be considered personal data.

If you decide to deploy, install or run Trapdoor you will be agreeing to release and hold us harmless from any responsibility resulting or arising directly or indirectly from the use of Trapdoor.

You are solely and exclusively responsible for the use of Trapdoor.

Feel free to reach out to us on Twitter or joining our Community Slack. We'd love to hear what you think of Trapdoor and maybe add some features to it.

The undetectable way of exporting an AWS DynamoDB

In this post we'll go over how we found a limitation in the current AWS CloudTrail logging features that limit detection capabilities of possible abuse against AWS DynamoDB, in the event of the user's AWS IAM keys being compromised. The objective of this article is to make users aware of this limitation and discuss alternatives for increasing the detection of attacks that might abuse it. This information was shared initially with AWS and only after going through the disclosure process with their security team did we decide to write it. Introduction & Methodology  A big part of the work done for our MDR platform comes from adversary simulation. Even though a lot of effort is put into developing our detection capabilities against a known killchain , we're constantly looking for alternative ways of attacking AWS workloads, regardless if the techniques are seen being used in the wild or not. Our methodology for doing these simulations is quite straightforward. We sta
Read more

This blog post is the second part of our Detection as Code (DaC) challenges series. You can read part one here . The development process of detections by itself doesn't pose a lot of barriers for security engineering teams, as they are typically done in a lab/controlled environment, but after tuning and deploying rules to a SIEM, the work is only starting. Many things can go wrong after this, and a process of continued and automated testing is crucial. Detection Validation In an ideal (and fictional) world, once the datasets are parsed, normalized, and put into production, detections developed by your team would work forever. Still, the reality is quite different. Maintenance is heavy work that needs to be done frequently - especially if you work on an MSP - but the reality is that the ecosystem lacks tooling and processes to do it proactively. Effectiveness is an important metric and crucial to the successful response of incidents in time, and effectiveness is what we aim to ensu
Read more